Pulp Scenery - Build Your Own Ziggurat

My surprise addition for UK Games Expo this year was a new demo set piece for Pulp! The Ziggurat of Doom is a neat little demoing accessory that caught a fair bit of attention at the event. I figured it would be useful for folks to know how I went about making it.

So the first step for the Ziggurat was collecting some suitable polystrene. The material used actually came from some furniture, which tends to come packed with nice thick board pieces. I cut these to size and invested in some foam board on which to mount the final piece. Each level has an inch or so width making it ideal for most miniatures. The initial board cuts ended up giving me a rough shape as below: 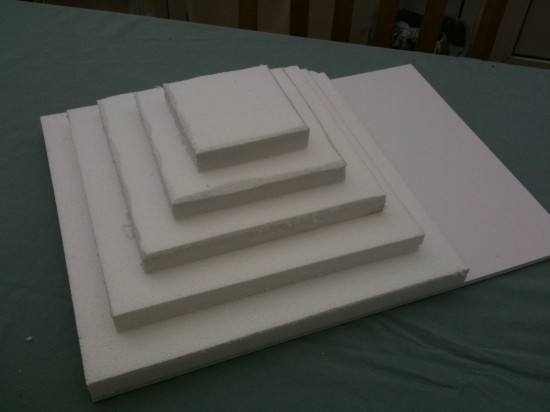 The basic shape was fine, so the next step was to bevel of the edges with glasspaper and then cut the regular shapes to be more broken and irregular with a craft knife. I cut each layer into sub-blocks, which will give the final thing more of a feel of big slabs of stone (and also all sit at 2 inch intervals as a game aid). At this stage I glued the main sections together with PVA glue. 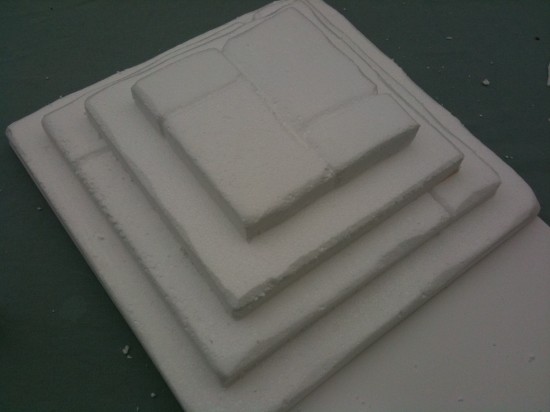 Next I built the temple-top, a nice feature for play and some valuable cover! I also added some basic rubble and the main steps. Most of these were made from offcuts from the original pyramid levels. 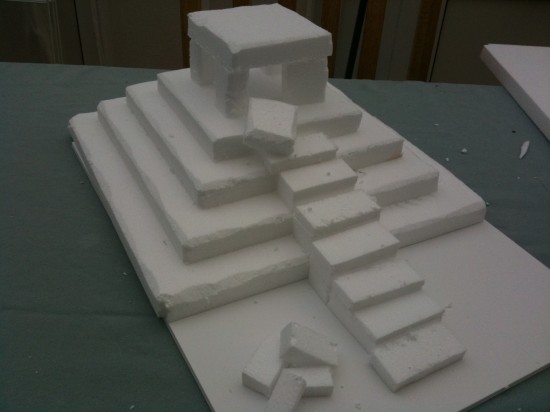 Next I took the steps and again split them into pieces. Generally by thirds or in half to give the feel of cracked pavement slabs, each individual piece was beveled with glasspaper. To give a proper feeling of collapse, I cut some chunks out of the main pyramid levels, so the steps could be falling inwards. Once again thinking about how the model could be used in game, I added the various broken pillars for additional cover.

The next stage was adding some glue spots to the model and dusting it with sand. I did this on the main temple for texture spots, some to be painted as moss, some rough stone or as actual sand. I used fairly hefty dollops of glue and left the sand until it was dry then poured it off. 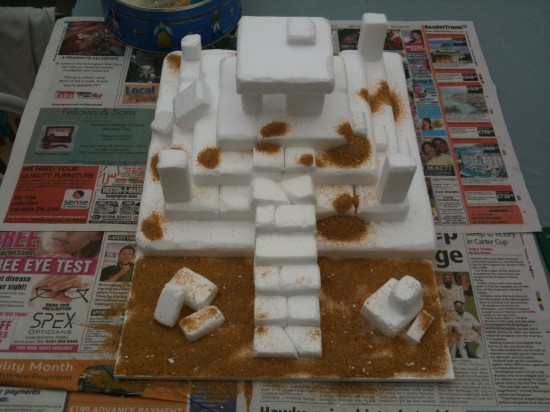 Next I gave the whole thing an undercoat with some household paint (a Dulux Once tester pot). This gives the model a strong base to paint on and hardens to make it more robust in play. 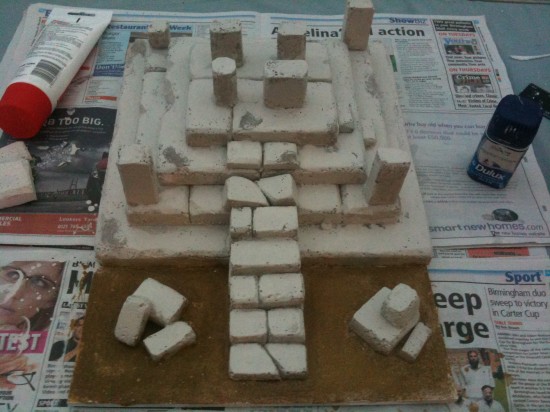 Nearly finished! The next stage was to wash the whole model with a mixture of black miniatures paint, black ink and PVA glue. This gloopy ink wash fills the cracks and adds a nice depth of shadow to the final thing. 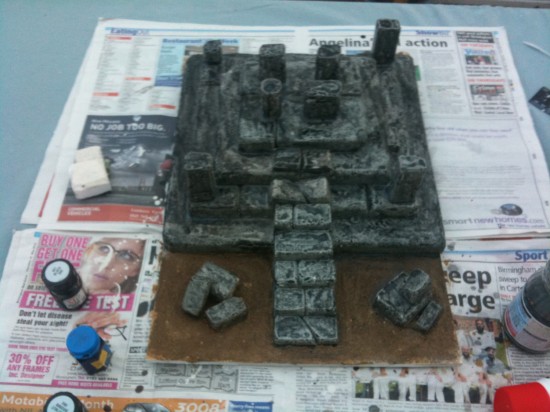 Next I layered on several coats of dry-brushing followed by ink/paint mixes. This gave the temple a nice stoney feel. I also painted some of the sand patches as mold using some lurid green paint. 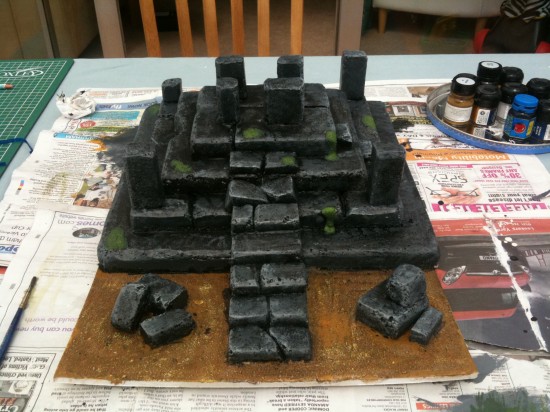 Lovely! Oh, you may notice that the foam board has curled. This is because it should really be mounted on hardboard of some kind, but I didn't have any. Overall the entire build process took about a day of time (with extra gaps where I waited for paint to dry).

Here's the final piece in situ at the stall at Games Expo, complete with Pulp figures and a copy of the rulebook. 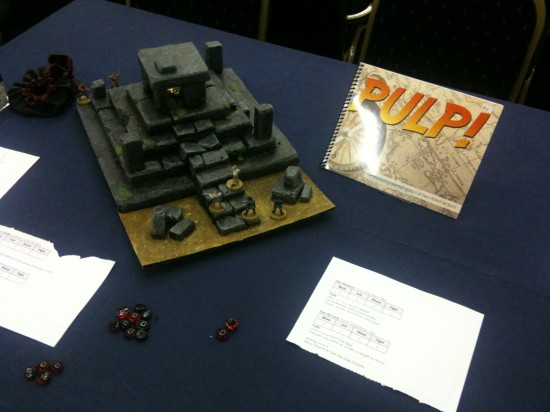 You may have noticed some changes, or that the articles section just grew quite a bit and that some of my game experiments just appeared in the sidebar. This is because I'm correcting a mistake from 2006 and migrating the ezine content across into this site. All this is content that had languished on the old org.uk version of the site, and that I wanted in one place because Realms is one site with different facets, not a set of distinct projects.

The first weekend in June is the weekend of the wonderful UK Games Expo, a three day long games extravaganza featuring the best of the UK's boardgames, miniatures, card games, video games and RPGs.

I'll be there with the Collective Endeavour, with copies of Pulp! and Covenant for sale. I'll also be running a game of Covenant on Saturday morning, it's called Ends and Means, but like all such scenarios it's wide open for playroom input.

I'll also be running demos all through the Saturday and Sunday in the trade hall. With a little surprise, if I can get my act together...

This weekend I'll be at the wonderful Conpulsion in Edinburgh. A great weekend's worth of convention, I'll be speaking on a panel on smallpress publishing and manning the Collective Endeavour stall. Come and say hi!

In 1999 I got the realms.co.uk domain name free as part of an ISP deal. This site, in its initial form, was created. Uploaded by 56k modem (remember those?), it began as a place to put reviews, articles and game ideas. Some of those reviews look pretty awful now - 7th Sea being one, but some of the other work holds up. That site of course moved to the Realms.org.uk domain, largely due to wanting server-side scripting, but not being able to free the domain from the ISP...

The eZine went in fits and starts, looking back round about 2002-2003 was that site's high point. I was posting reviews most months, articles and interviews too. The directory was humming along with new entries. I was chuffed to get comp copies of some games to review, kinda felt like I'd landed somehow, somewhere, in RPG land. In those years I had the fun of unreliable hosting, lost database backups, rebuilding the entire site from Google's cache and other trials of the web. I had articles translated into Hebrew and French, I met people online who shared similar interests in game design and play.

There were some good discussions on the forum, I remember a great thread on the burgeoning UK RPG Publishers scene... The forum went through several incarnations eventually using Vanilla's first beta, and then closing down because there were other, better, places for that kind of discussion and anti-span measures hadn't been invented yet. A lot of RPG discussion was going on on Livejournal by then, so I got one of those for a while...

I was active on other forums at that time and helping out other folks who'd just self published by reviewing their stuff or with minor editorial duties. In 2004 I went from helping others to joining in and was one of the authors involved in the Nopress Anthology. That release led to visiting some cons, including Spiel Essen and Dragonmeet 2005. That event was pivotal as I met up with some folks I'd chatted to online like Malcolm and Gregor, and solidified my plan to release a game on my own.

For a while this site just redirected to the eZine, but I eventually managed to free up the domain and so when it came to commercially releasing the games I'd made I decided to move that here. So in 2006 this site re-launched as the design blog and publishing side. Looking back, I probably should have shifted everything here and taken advantage of the eZine's visibility more. It still gets more traffic to this day, even after not having a new article since 2006.

I've not done too bad in three years of self publishing though, Covenant sells steadily and Pulp! has gone from ashcan to final release. Most of my design discussion now goes on at the Collective Endeavour, and that little community seems to have found its niche nicely too. It does mean I don't post about design here though, just cons and news, which leaves it feeling a little empty.

So I'm left wondering quite where to take Realms next. Ten years is a long time to be online and it feels like time for a change. I'm thinking of maybe merging the two sites once more and culling some material that's no longer relevant. Thoughts?