Update on The Queen's Men

I've been chased about this at various conventions, so I thought I'd give an update on where we are with The Queen's Men.

It's done, or at least the main text is finished. It has also been edited by the wonderful, Scott Dorward, who you may remember from such podcasts as The Good Friends of Jackson Elias. Scott found my typos, corrected the ordering and generally made it a much better text.

I'm very pleased with the results. It is now a fully fledged piece of multi-layered fiction gaming, with rules for cast DVD commentary, lots of pre-gens and comedy 70s haircuts.

So now it just needs layout and art. Which, if all goes well, means a release as PDF some time in the new year.

A Trip Down Podcast Memory Lane

Once upon a time, back when I was far more active online and busily debating new techniques in rules design and game structure over at The Forge, there were a number of Podcasts which I used to listen to. My favourite was Sons of Kryos. It was a nicely balanced mix of anecdotes of games played, playing advice and general chatter. Jeff and Judd (and later Storn) were personable hosts whose enthusiasm shone through. It had interviews recorded at conventions and dammit, they made GenCon sounds so much fun! So much so that I resolved to visit it myself (I actually got to game with them there in 2008 while helping out on the Play Collective booth).

A few years ago their old site dropped offline, and I feared the archive of this seminal gaming podcast was lost. Then, only a few weeks ago Judd announced that they'd uploaded the early episodes to the Sons of Kryos YouTube channel. You should go and listen, though some elements have dated, they're a wonderful snapshot of a certain era of RPGs in terms of play, culture, ideas and events. I'm glad they're back online.

They never did end up interviewing me about that Larp at King John's hunting lodge though...

Today I saw with great sadness that one of my favourite authors, Sir Terry Pratchett, had passed away.

To say that he was a massive influence on my teenage years is something of an understatement. His books kept me sane when I moved from a bustling metropolitan area to a remote corner of England. I eagerly awaited each new volume, from about the publication of Mort onwards I devoured his output, with the assistance of the local library.

I was lucky, when I was 17 he visited my school. He gave a talk at the library, but also did a small session with a number of students keen on writing and his work. He told anecdotes about his time as a local reporter, and how those skills helped him as a writer. He told us about the time, during the great D&D scare of the 80s, he ran a roleplaying game for a group of 70-year old grannies to show them how it was harmless entertainment. He was inspiring, insightful and patient, even when we all wanted 20-odd books signing because we were stupidly obsessive teenage geeks.

He did it all for a reasonable donation to the campaign to save the orang-utans.

Towards the end of the event we mentioned we were producing a newspaper for our year's graduation and would he write some wise words for us. He did, and what he wrote in my hastily proffered notebook I still have today. A scan of it is shown below, it seems appropriate to share his rules of life with others on this sad occasion: 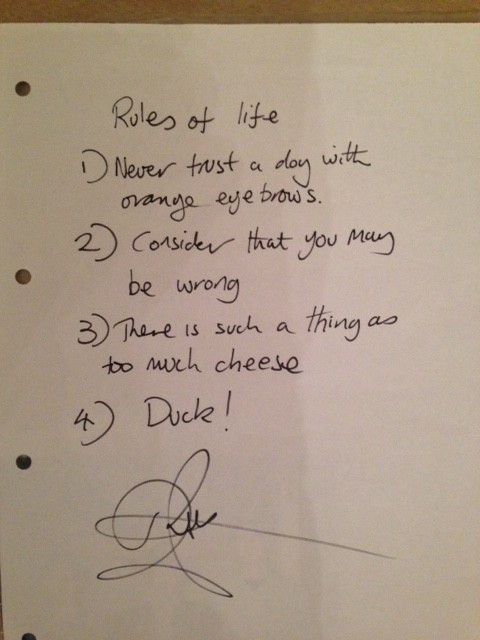 He will be missed. My thoughts are with his friends and family.

"A man is not dead while his name is still spoken"

5 days before this offer self destructs

As of today, for the next 5 days, you can get The Agency at a pay what you want price.

That in itself would be pretty cool, but you can get this as part of a bundle with what I consider to be some of the classics of indie game design and great new games. There's some seriously good stuff in the Bundle of Holding. Plus 10% of what you pay goes to two awesome charities.

Look, do I need to tell you that Sorcerer is the classic indie game that reinvigorated the grassroots RPG publishing movement and has some seriously clever mechanics that drive story in play? Or that Dust Devils is THE definitive western RPG. Or that Heroine is what Labyrinth would be if it was distilled into RPG form? Or that Annalise does vampire stories so so well?

And those are just some of what you get! There's even secret stuff still to be added...

Really, on a personal level it's great to be seen as somebody whose games even belong in this august company. Go buy it. You can't really lose at a minimum $3 buy in (although you need to pitch in at above average to get all the titles).

In the very first version of The Agency, there was a throwaway alternative setting concept for Elizabethan agents. When I revised the book, I considered adding it as an appendix, then decided it would make a nice PDF only supplement. Like all good ideas, it grew, and The Queen's Men came into being.

It's part supplement to The Agency, part something all its own. It takes the more meta elements of The Agency, and expands on them. SO it's not just an alternate setting of agents in 1585, it's about a 1970s TV series that never was, and the trials the actors and director went through to create it. I hope to give it the feel of a TV series annual from the era.

Anyway, the manuscript is nearly done, so I'll have more information soon. In the meantime here's a character sheet as teaser.