Spaghetti Conjunction is a fine one day convention in Birmingham, put together by the stalwarts of the local scene Pookie and Simon Burley. I've been to most of them, but realised I hadn't mentioned them here. Since the most recent (2B) was held just this weekend, I thought I'd rectify that situation.

Taking lots of inspiration from the excellent Concrete Cow in Milton Keynes, Spaghetti Conjunction uses a tom-bola ticket based signup that reverses order between morning and aftenoon sessions. This means everybody has a good chance of signing up to the game they want (and newbies to the con get a golden ticket to pick one game in one slot, which is a nice touch).

As a small convention of about thirty to forty people, it features a fine variety of games. From D&D to Dead of Night, so whatever your RPG tastes there's something for you. I played one of Neil Smith's Gloranthan Heroquest scenarios in the morning, which was a great little tale of a peace process between two rival tribes that goes wrong and revolves neatly around the conflicting agendas of the characters. In the afternoon I played a small suburban horror scenario Lamp Posts In Bloom, run by Robin Poole, which I later learned was written by Scott Dorward (an excellent scenario writer friend of mine who also happened to edit The Queen's Men).

One of the nice things about the convention is the raffle, which thanks to the industry folks involved attracts a lot of good prizes. So you've a good chance of winning a giant Zweihander hardback. The raffle also raises money for the local charity of Birmingham Children's Hospital, where any profits over the cost of running the con also go.

So as a convention Spaghetti Conjunction offers a lot in a one day package, and if like me you're local then attending is an easy yes. It's not without a few issues though. The venue is Geek Retreat, and as a cafe it does a good line in teas, coffees and sweets, but the food is mostly of the bland burger or nachos variety. Given the many amazing food places in Brum city centre, you might want to decamp for food, but the con only get the venue on the assumption people will buy lots of food and drink, so that puts you in an awkward position. The venue is also beginning to start to strain under the numbers attending the con, which means the upstairs get a bit stuffy around midday. However, too many people is a nice problem for any con to have only a few years in and these are minor quibbles over what is a wonderful little one day convention that you should definitely go to if you are in the West Midlands.

Were all things discussed when I joined the nice folks on the Unlucky Frog Gaming Podcast to chat about Indie RPG publishing, design, the growth of the gaming scene in recent years and more.

The Queen's Men Is Out Now!

The Queen’s Men threw historical accuracy to the wind and mixed action, adventure, espionage and horror into something quite unique, before it was abruptly cancelled.

This is the roleplaying game of that series. A multi-layered fiction where 70s genre television re-interprets history and you play an actor playing a historical personality - badly.

Featuring everything you need to tell the story of the making of this classic show:

-Quick and easy rules, based on The Agency -Pick up and play characters and scenarios -Stunt crew strikes, DVD extras, wobbly sets and bad haircuts

A roleplaying game for people who love quirky genre TV, inspired by shows like Department S, Garth Marenghi's Darkplace, Danger 5 or The Persuaders.

One of the nice things about prepping for conventions (in this case the excellent UK Games Expo), is it gives you time to focus on a single scenario.

I'd been considering a more detailed introductory scenario for The Filthy Dozen since its release and the result is The Gonnes of Nava Rûn. And yes, this is inspired somewhat by The Guns of Navarone. It's for 6 players, though you can tweak it for fewer. It contains enough side-tracks and random extras to keep your goblins entertained for a few hours.

Sometimes things work out weirdly. You spend ages on one game, only for a delay to hit it unexpectedly. So another is unleashed faster than you expect.

The Queen's Men done, but awaiting art. It's from the very cool, David Michael Wright, so it's worth waiting on. He's a talented man, so has a queue. 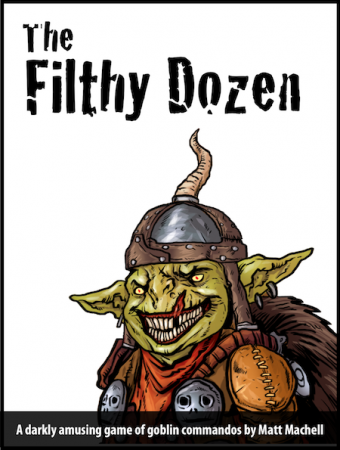 Meanwhile, I managed to finish off a side project called The Filthy Dozen. A dark and amusing game of goblin commandos, trying to survive in this here army. It's inspired by World War 2 movies like Guns of Navarone and novels like Bernard Cornwell's Sharpe's Rifles and Terry Pratchett's Monstrous Regiment. It take some mechanics from the excellent 3:16 and twists them in new, and hopefully entertaining, ways.

It's full of quirky goblins, comedy and tragedy. It features choices like sacrificing a comrade or your very impressive hat, serving a lord who cares little for you or forging a new path. It has rules for Violence and Other Stuff.